To understand what happens in the brain during behavioral disorders, it is necessary to understand the brain's reward system. This is where the article by Ferenc Mátyás Ferenc and Ákos Babiczky, published in eLife, contributes new data and approaches.

Few people have never watched with interest and often fascination how dogs, cats, and even birds raise their young. And who hasn't laughed when a disobedient little one is sometimes taught to behave by the parent who is doing the parenting and teaching, sometimes not very gently, and the little one is visibly surprised by the unexpected "attack"? Who doesn't know the role of reward in getting an animal to do something that is most important to us?

We humans did not discover the importance of training, but we are the only ones who have endless discussions about training. We have been doing so practically since the rules of social coexistence were first established, and it is no coincidence that one of the definitive works of one of the greatest figures of the French Enlightenment, Jean-Jacques Rousseau, known at least by title, is 'Emil, or on Education.

But the importance of the role of 'reward' and 'punishment' is most vividly illustrated not by the pedagogical battles, but by the fact that our brains have their own reward system.

It may come as a surprise to learn that the study of the brain's reward system has long been an intensively researched area of neuroscience and that some of its anatomical details and genetic properties have not yet been fully elucidated. And without a precise anatomical basis, the usefulness of other results, even those obtained by state-of-the-art techniques, is rather limited.

What we do know is that dopamine - the brain's 'reward molecule' - flows through two ancient brain regions, the striatum and the tegmentum, and regulates various reward-related processes.

Ferenc Mátyás, head of the Network and Behavioural Neurobiology research group at KOKI, and his Ph.D. student Ákos Babiczky, investigated the relationship between these two brain regions and the so-called medial prefrontal cortex (mPFC) in experimental mice.

Questions are answered by the first author of the experimental work, Ákos Babiczky.

- How and why did this successful research project start?

- Our research group investigates the effects of different neuron networks on behavior. The basic premise of this work is to identify the elements of the networks and to precisely reveal the links between them. Although we have recently only dealt with the reward system in a tangential way, I personally have always been interested in the topic, and it is not far from the head of our research group, Ferenc Mátyás, who wrote his Ph.D. thesis on the subject. A small part of his thesis was an investigation of the relationship between the brain areas that build the system, the striatum, tegmentum, and prefrontal cortex. However, exactly which areas, layers, or groups of cells in the cerebral cortex are connected to neurons in the striatum and tegmentum was far beyond the scope of the dissertation, and the literature was severely lacking.

- Have others not investigated these pathways before?

- Of course, others have been looking into these areas, decades ago. The problem was rather that few people cared so much about anatomical precision. But there is a great tradition of neuroanatomy in Hungary, and we are trying to keep up with it! We do this not only because of the tradition but because without a precise anatomical basis it is very difficult to interpret the results of functional studies at the network level, whatever brain area we are studying.

In previous studies, the approach was different. In many studies, for example, it was not at all clear what the principle of separation between subregions of the medial prefrontal cortex was. In our view, it is not sufficient to try to "draw the lines" of an anatomical atlas on the patterns. A more biologically relevant solution is needed. I believe that many controversial results stem from just such anatomical inaccuracies.

- Anyone who is even a little familiar with the techniques you used knows very well how much work you had to do to get the results. How long did it take?

- It was originally going to be a small "mini-project" funded by the New National Excellence Programme, and the plan was to submit the manuscript within a few months. In the meantime, however, a lot of interesting new findings and new questions emerged, which were then incorporated into the final paper. And the original plan turned into almost exactly four years. But I think that happens in many labs.

- How did you work together and what was your "biggest idea"?

- We did a lot of thinking together on the way, and we both had a lot of questions and new ideas. It's hard to pick one thing that was "purely" my idea, but perhaps the first thing that came to my mind was to see if a medial prefrontal cortex cell would project to the striatum and tegmentum at the same time. The results show otherwise, the cells that innervate the two areas are largely separate.

- How did the idea for your method come about?

- We have been working with the anatomical methods described in this article in our lab for a long time. I think I am most familiar with them myself, so it was obvious to use them. But it is not the methods themselves that are the big novelty, as they are available in many laboratories around the world, but the way we have used them in combination, systematically, with a strong emphasis on anatomical precision. This approach could be used by others, and in fact is explicitly recommended to the scientific community in this paper, as it could be used in virtually any neuronal network - including physiological and behavioral experiments.

- What do you think will be the first such experiment?

- We have no plans for physiological and behavioral experiments on this topic at the moment, but if it were up to me, I would certainly look at how the genetically modified mouse strains we are presenting could be used in some classic reward and addiction tests. It would be interesting to see if stimulating or inhibiting different cell types has different effects in the same behavioral situation. Of course, this would mean a lot of work, and perhaps not enough results for a single article.

- Why did you choose the eLife journal to publish your work?

- eLife is a relatively young journal, barely ten years old, yet it is now widely known and respected among life science journals. I think one of the reasons for this is that the editors follow a progressive philosophy that puts the interests of science before profit. Accordingly, the journal is run on a non-profit basis and researchers can apply for exemption from the costs of publication if their financial resources do not allow it. This can be a great help for smaller labs and younger researchers.

They also have other forward-looking practices that set them apart from other scientific journals. For example, they often accompany their articles with an easy-to-read abstract, and they also run a scientific podcast in collaboration with BBC Radio, which is also aimed at a lay audience. These are initiatives that I find very appealing and I am particularly pleased that our article has appeared here.

- You are a Ph.D. student at the beginning of what I hope will be a very successful research career. Have you got what you expected so far?

- I've been preparing for a career in science since I was in high school, and I didn't have any other really serious plans. Originally I was not interested in neuroscience, but in immunology, but somehow I ended up here, which in hindsight I don't regret - in fact!

In the second year of my undergraduate studies, I joined the Thalamus research group led by László Acsády, where I was already working with Feri Mátyás and have been doing research with him ever since. I've been working in the lab on a daily basis for almost nine years, so naturally, I'm getting more and more involved. Also the non-scientific parts of the scientific career.

There are many things that are not necessarily attractive to me. For example, I'm not particularly competitive and I know that can be a disadvantage. But they haven't put me off yet.

- That's very nice to hear! What next? Do you have any plans other than research?

- For the time being, I would like to finish my Ph.D. - this article brings me one step closer to doing - and then moving on to postdoctoral life.

However, in addition to science in the narrow sense, I am also interested in science communication and dissemination. 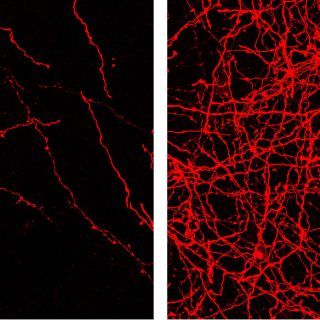 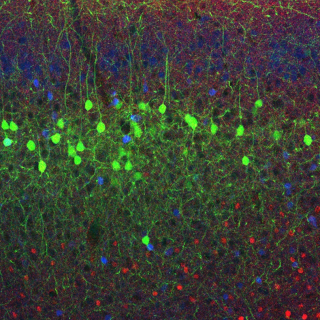 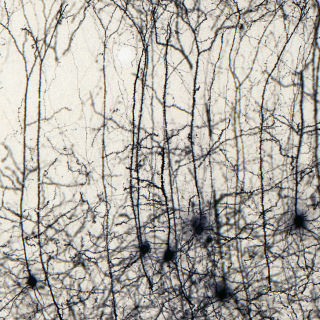